An explosion of color has happened all around us in just a few days. This never fails to amaze me in Ohio.

In Ireland we never loose the green of the grass in winter but here it goes dull and brown. With a little heat and rain it becomes almost fluorescent.

The daffodils and hyacinths also seem to grow at lightening speed. You need to make the most of them while you can though. Unlike in Ireland where they linger in the cool of the February spring we’ll into the beginning of April here the season is a short two weeks.

The cherry blossoms have also popped overnight and are bringing color to the city as well as the suburban gardens.

All these delightful signs of spring remind me of my first year at college when I went with friends to work the summer in Holland.

We camped for ten weeks and worked every hour we could in the bulb fields. First the lads pulled the bulbs and we girls cleaned them. It was really dirty work and we were paid by the basket. Man those baskets were big. They could easily hold two hundred bulbs. There is no way to describe the state of your hands after a day on the job except that the dirt was still  ground in them the next morning. 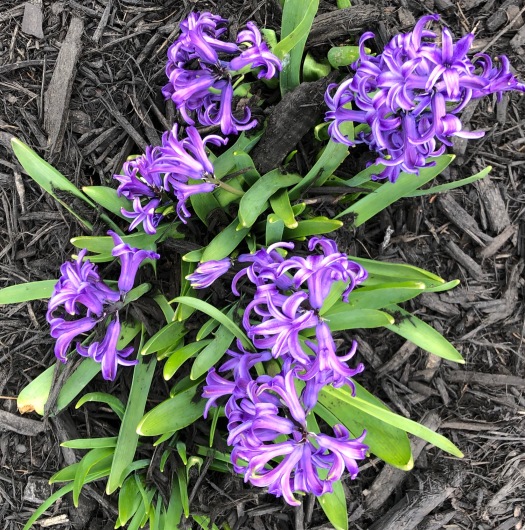 One if the biggest challenges with the job was a condition called Hyacinth Itch. When we got back to the camp ground at night we all knew who’d been working the hyacinths because they’d be scratching all over.

Once the bulbs were all plucked and cleaned we moved on to packing. This was much more civilized but was a job that kept you on your toes.

The bulbs were packed into boxes or bags six rows high and stacked on pallets. That’s when the fun started. Someone would stand at the end of the conveyor belt and shout out the order for each customer. It would go something like this. Four Royal Tulips, six Dutch Glories, three Mighty Warriors etc etc

We students would then run around like crazy putting the bulbs we were assigned to onto the merchandising case. It was hilarious. Talk about a work out.

The funniest thing was one of the varieties I was assigned. It was a miniature daffodil just like some growing in our garden right now and had the unforgettable name of a Little Willie.

The ribbing I got back at the camp site was classic. So Gillian my pals would ask how many Little Willies did you handle today?