We entered and left Wales a few times today. Traveling from Chester to Newport the border with England is never too far off. 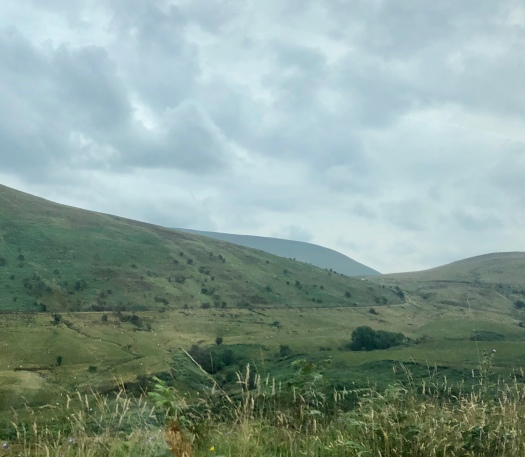 The scenic route through Brecon Beacons National Park hit many places with funny names that we’d heard before but never seen.

The day was warm but dull at first and while the rolling countryside was inviting. It was gentle rather than powerful.

Our plan had been to drop our things at the hotel and hit Cardiff but there was a huge tailback in that direction so we changed plans and went to Bath instead.

This is a Jane Austen worshipper’s heaven! Lydia and Wickham or Elisabeth and Darcy might turn up at any moment. I won’t ever sleep the same again.

The Roman baths, the pump room, the assembly rooms and the Royal Circle. What a very special city.

Would love to come back.

Even noticed a Bennett Street and wondered was it Jane’s inspiration for the Bennett Family or did someone name the street after them when they became so famous. Any of you know?

Having done enough for one day we slipped into Waitrose and bought a picnic and are tucking in now in our room.

So enjoying also having the treat of an AC  especially since all those thoughts of officers and handsome landowners could make one a little hot under the collar!