We’re definitely doggie people as Aaron is allergic to cats and Krishna just doesn’t get them. I can take cats or leave them but would never want to own one although many dear friends are kitty crazy.

Not sure why they don’t do it for me but I suspect it’s because they are so aloof and being the Alpha type I need lots of attention.

They also have a great ability to control their food intake and most seem to remain slender and youthful for eternity. So truth be told maybe I’m also a tad jealous.

There are exceptions though one being the only cat that I ever really grew so fond of as to say I loved him. He was called JuJu and lived a long and highly indulged life with my friend Patrica.

We were living in Switzerland when we first met him as a kitten. As we moved we didn’t see him so regularly but each time I went alone to Switzerland I stayed with Patrica and he always made a point of snuggling up with me and even shared my bedroom.

He was HUGE all muscle of course! With beautiful markings and a little half moustache. He enjoyed his food so much and wasn’t bad at devouring the odd mouse either. So bottom line is he was a rare breed not a picky puss at all.

Why though don’t most cats overeat? Is it because they are true carnivores driven to eat meat and not the least interested in sweets? Does that really keep you feeling fuller forever?

Maybe it’s a hormonal thing after all look what that Cushings did to dear Dibley. Maybe it’s just the boredom of eating when they could be out prowling instead.

This past weekend I was charged with preparing breakfast for the volunteers staying at the Church before we left for prison each morning. We had the usual array of cereal, fruit, bagels, cream cheese, sliced cheese, raisin bread, yogurts and just in case that wouldn’t be enough a gazillion hard boiled eggs.

Well you can guess what’s left. So it is that I’ve been on the Humpty Dumpty lunch yesterday and today and am set to continue for the foreseeable future.

There is just something about this food that sure does keep the hunger at bay. 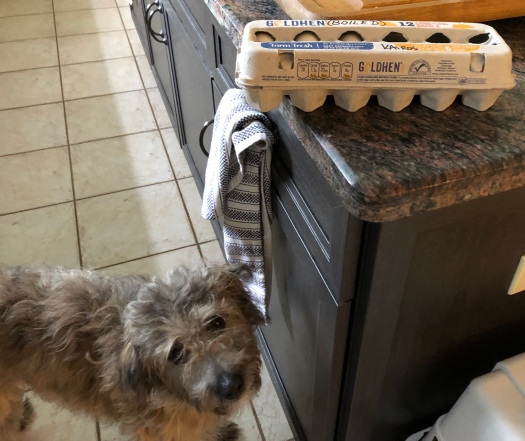 Maybe I’ll just have to « crack » and share with a certain person or just slather them in mayo and onions and stick them between two big bits of bread and be done with it!