As we’re going out tonight to Krishna’s favorite Indian restaurant Aaron and I decided we’d give Dad his birthday cake last night.

He is particularly partial to a little chocolate number from Aldi making life easy for us all. So we stuck three candles on it, put it on a nice glass plate and hid it on the second shelf from the bottom in the pantry ready to light when it got dark.

Being Saturday evening I was engrossed as always in the Great British Bake-off while the men of the house were silenced and doing their own things out of earshot.

When the sun set and dinner was over Aaron and I went about turning off the lights and lighting the candles only to discover that Scooby has been busy with baked goods himself.

He had managed who knows how to get into the pantry and eat a good third of the cake! There was not a single crumb on the floor! He hadn’t pulled the plate down either. The only trace he left was a chewed up candle on the floor! 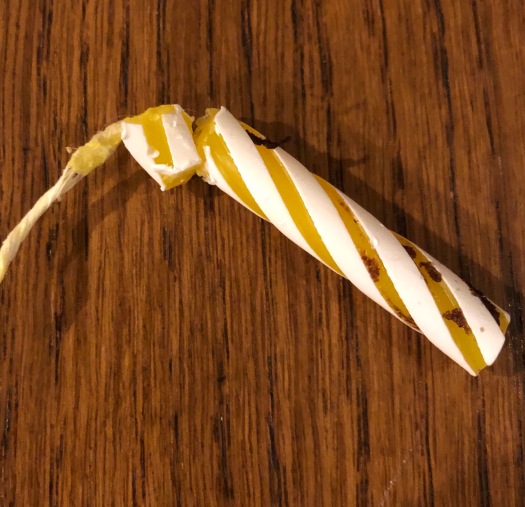 Panic then set in rather than celebration. The cake was dark chocolate. It had chocolate frosting and chocolate chips in it too. Chocolate kills dogs! Had he eaten enough to do himself harm? Aaron and I both started googling and Aaron found an app that concluded we should get him straight to the vet.

Krishna meanwhile got out GBBOs Mary Berry’s Baking Bible and calculates the typical dry matter of chocolate cake, the usual cocoa content and the theobromine content.

He concluded that given Scooby’s weight of 30lb and the fact he ate about 7 oz of a cake with cocoa as the fourth ingredient we should monitor him for signs and symptoms.

He wasn’t sick or shaky before bedtime but he did do a pee inside which he hadn’t done since we first got him! Could be the diuretic effect of the cocoa powder.

During the night he did seem to be panting a bit or was that just my imagination? Anyway it kept me awake for sometime worrying until he was calm and sound asleep. Fortunately today was the day when the clocks fall back so we got an extra snooze to recover.

Today he is fine. No tummy troubles at all just a little more energetic than usual. Yet another lesson learned; nothing unwrapped within reachable height of  this boy even if you think it’s behind closed doors!

Helped with the diet though!