These last weeks it has been forbidden to speak to me between seven and eight on Sunday evenings. The Forsyte Saga is running on PBS.

It’s the 2002 version with Damian Lewis as Soames. My Mother was just as addicted to the original 1967 version when it ran on BBC. Everyone was silenced!

The trilogy is just as good as the TV series. Probably very racy for the time when it was published and definitely on my top ten list of best books. If you haven’t read it do give it a go. 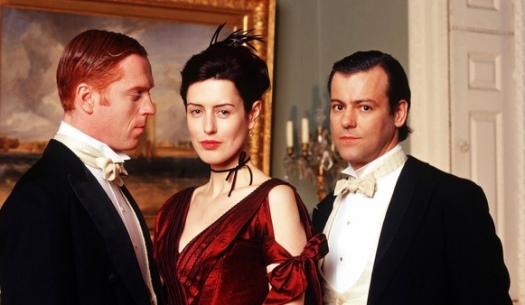 Last night Soames and Irene the long divorced key characters meet in a museum with their children by from their subsequent marriages. It’s awful in its awkwardness and the looks of hate and hopelessness are horrible.

Made me ponder what makes a great story and the conclusion reached was that there has to be at least one character that becomes written onto your own heart.

This might be surprising but in the Forsyte Saga for me it’s Soames. He appears cold and mercenary but he is a good son and brother. He is sadly obsessed with his first love Irene but shows that he has redeeming character in his love for his only child Fleur.

Even though I was just a child when the first series ran I never forgot Eric Porter and his sad dark look. Damian Lewis as Soames has quite a different appearance but both of them you could class as creepy. Almost like Dracula. So what’s it that makes the character so pointent. The depth, the sadness the goodness that eventually come to light. Who cares to speculate?