Women are weird. They want something but when they get it they can’t content themselves. When I get what I want I have a good sleep. Ma? She’s got worse with the tossing and turning and it’s having an impact on our life.

Today she was sure the tea-room had great potential so she hauled poor Dad to the kitchen equipment store in Columbus. When they got back she said she had to go to the pool to think! I wondered was she going to jump off the deep end!

When she got back she hardly said a word. I was starving but she completely neglected that and got into making tonight’s dinner Turkey Tetrazzini.

She’d decided on this because she had mushrooms to use up but the woman’s mind was clearly not on the job. Just when she had everything ready for the oven she turned around and there were the mushrooms washed and waiting on the counter.

The language was not for the faint hearted. Put it like this even I was glad Dad was not in earshot as he would have been severely startled.

She cut the fungus in half arranged them on rather than in the sauce and covered them with cheese. Heaven knows what it will taste like when it’s baked but the outcome was good for me. 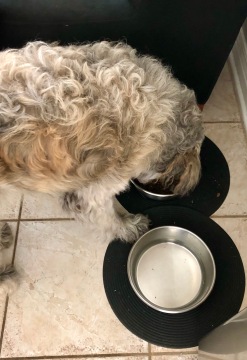 She tossed a handful of cheddar in my kibble. Oh YUM!